To mark the fifth anniversary of R.L. Kumar’s passing, Centre for Vernacular Architecture Trust in collaboration with friends in Udbhava, Open Studio, Good Earth and Kalminchu Trust for Vernacular Livelihoods and Bangalore Film Society organised a public screening of the film Uncommon Sense: The Life and Architecture of Laurie Baker by his son, Vineet Radakrishnan. It was followed by a panel discussion on Vernacular Values at NGMA, Palace Road, Bangalore.


This year marks the birth centenary of Laurie Baker, whose varied life across careers and countries continues to inspire and influence many. This social documentary covers his remarkable life story, examines his pioneering socially and environmentally relevant building philosophies and his radical, innovative ideas that redefined the role of an architect and architecture in turn.


Vernacular Values: Praxis, Practice and relevance of the Vernacular


When Kannada writer, Nataraj Budalu, was in the process of documenting "Thatva Pada" which are the Kathala Haadu, (songs from the dark), a literature being constantly created from the everyday lives of 'common' people, he met an old woman, who gave him a piece of her mind which he poignantly shared with us.

"I have come to document the songs you sing."

"So that it is not lost to the coming generations" he says.

"Ayyo....let these songs die. So what? We can always make a couple of new ones again!"


Impermanent, informal, fluid and totally confident about living the present is the nature of the unselfconscious vernacular that cares not for posterity or the past, Budalu told us after hitting us on the head with his self introduction as an Appata Desi!


Prasanna, the theatre and Desi activist went a step further. This capacity to live in the here and now, comfortable with the idea of the past and the future in the present is what is embodied in the idea of the local or the vernacular. Not the idea of a Permanent Nationalism that is being peddled today. We should be local in body and global in the mind and in doing so we need to construct the world of the Dalit while deconstructing that of Brahminism, he said uncompromising in his stand that Shrama or working with the hands has to be brought back to a position of privilege.


It is the vernacular that gives us access to worlds that we have homogenised and standardised, said Chandan Gowda, academic activist from Azim Premji University. Take the word Kayaka (or worker) as opposed to 'Labour'. The latter confines the notion of work to the logic of Industrial capital while the former opens up so many more layered meanings that we need to be aware of to even enter or understand those worlds.


For Ajay Nityananda, the architect, going vernacular was a personal choice of becoming a practitioner by moving to work on the land with his hands. Though, he confessed, these were confusing times when farmers themselves are giving up the plough to go in for mechanisation and tractors, which is understandable.


Moderated most unobtrusively by architect Sathyaprakash Varansashi, these and many more gems emerged at a panel discussion on Vernacular Values when we came together on August 12 to celebrate the life and work of Laurie Baker in his centenary year, in memory of a barefoot architect-disciple he inspired in our founder, R.L. Kumar.


Both, the screening of Uncommon Sense, a film made on Baker by his grandson Vineet Radhakrishnan — who was present with his parents and wife — and the discussion that followed, drew a large appreciative audience with many not even finding place to stand in the hall! Apologies for the disappointment caused. Hopefully there will be more screenings in the city to cater to this insatiable appetite for learning.


It was inspiring to see the sustained interest from so many, especially the young, in Laurie Baker, and to constructively engage with the idea of the 'vernacular' in these times of hyper consumptive modernity and intolerant nationalism!

by Prof. Ashis Nandy on

R.L Kumar: The Vernacular Architect and His Ghosts 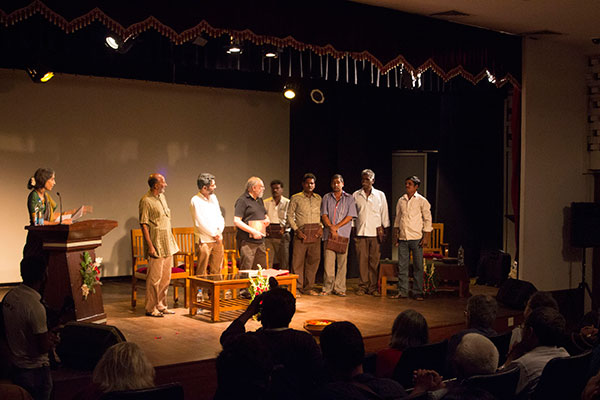 
The talk was preceded by the launch of a book of essays authored by R.L Kumar, Random Rubble: A Reader on the Vernacular. Himanshu Burte, architect and writer based in the Tata Institute of Social Science, Bombay, introduced the book.


Both Prof. Nandy and Himanshu Burte, in their own ways, while reflecting on Kumar’s life and work also reflected on dominant aesthetic theories, architectural traditions and the political philosophy of knowledge. There was much discussion and debate on the definition and conceptual underpinnings of the term vernacular... a way of life and values that not only informed Kumar’s architecture but one which he was convinced was critical and necessary if one wanted to live a more humane life on a human scale.

announcement in The Hindu by Sravasti Datta, June 12, 2015