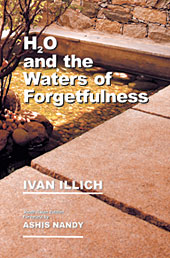 H2O and the Waters of Forgetfulness

with a Foreword by Ashis Nandy

Sweeping changes to our cityscape, water bodies and commons have taken place in less than two decades. It is in this context that it became important for the Centre for Vernacular Architecture to publish this edition. The urban landscape being fundamentally transformed into something completely unrelated to culture, climate or traditions of this part of the world, has made this book written more than two decades ago, most relevant today. This hubris of post industrial destruction and violence that civilizations outside the west face today has also produced a veritable crescendo of voices, concerns and protests that resonate with Illich's comment made many years ago — Modernity cherishes most what it destroys. It is this paradox that has been one of Illich's life long concerns. In many ways this book explores this in the context of water.

this lecture, on what might be called an applied philosophy of water, by an European turned South American to an American audience, tends to have strange resonances in this corner of the world. In this essay, histories of waste, slum and sewage converge with the imagination of purity, cleanliness and civility. Illich reminds us of our responsibility towards water as a constituent of a cultural mythos — a la Raimundo Panikkar — and speaks of water outside the reach of technocratic rationality, water that that defines us while being defined by us. I assure the readers that they will not emerge from the book without being challenged, provoked and enriched…

A Vernacular Way of Life

A book of memories and tributes put together for the first memorial of Kumar on June 23, 2013. 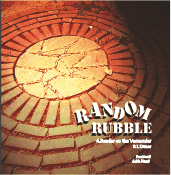 Random Rubble:
A Reader on the Vernacular

A Reader on the Vernacular

Woven together with extracts from two texts that were fundamental to his thinking — Hind Swaraj by M.K Gandhi and Paul Feyerabend's Dialogues on Knowledge — Random Rubble is a commemorative volume of essays written by the late R.L Kumar being brought out on the occasion marking the third year of his passing away.

Celebrating his work and his eclectic thinking that inspired and exasperated many, we hope this collection of his random thoughts will "unsettle'' and provoke readers into formulating a broader conceptual understanding of the vernacular within which a more critical praxis of contemporary architecture can be located.

The foreword has been written by Prof. Ashis Nandy and the Introduction by Himanshu Burte.

What is Architecture? – R.L. Kumar

The Future of Knowledge and Culture: A Dictionary for the 21st Century